“BIRD FLU is a bebop tune, but the melody is very accessible,” Dr. White said. “Very Parkeresque in my own head!” Recorded by KC Area Youth Jazz Fellows 2019 (ARC-2994)

“BIRD FLU is a bebop tune, but the melody is very accessible,” Dr. White said. “Very Parkeresque in my own head!” Recorded by KC Area Youth Jazz Fellows 2019 (ARC-2994)

THIS DOWNLOAD PRODUCT INCLUDES THE PDF SCORE & PARTS AND FINALE MASTER FILE: Copyright Arthur White, ASCAP. All Rights Reserved. International Copyright Secured. Made in the USA. Proceeds from the sale of this sheet music are divided equally between the composer and KC Area Youth Jazz. 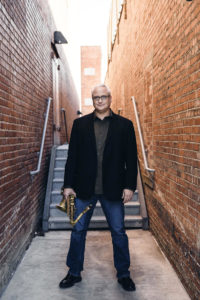 Dr. Arthur White, an ANDREAS EASTMAN and JODYJAZZ Saxophone Artist, is a nationally recognized composer, arranger, educator, and touring saxophonist. All About Jazz calls White’s ensembles “solidly impressive”, while referring to his “virile tenor solos”, “scorching alto broadsides”, and his ability to “vacate(s) the podium to fashion ‘splendid’ tenor solos…”. He leads MERGE, his original music jazz quintet, and is currently a full time member of Kansas City’s legendary Boulevard Big Band and Wichita’s TUMBAO. a Latin jazz/Salsa ensemble. His debut album, recorded with MERGE, will be released in the fall of 2018 on the Artists Recording Collective label.

Never one to shy away from new adventures, and with an undying passion for jazz education running through his veins, Dr. White is starting a new adventure in September 2019, when he officially becomes the director of jazz studies at California Polytechnic State University. He will direct Cal Poly’s two big bands and combos, in addition to teaching core jazz courses including improvisation, history, theory, arranging, and composition.

Prior to his Cal Poly appointment, Dr. White taught jazz studies for five years at Northeastern (OK) State University, and seven years as an associate professor/director of jazz studies at the University of Missouri. His ensembles were selected to perform for the 2016 conference for the International Society for Music Education, 2012 and 2014 international conferences for the Jazz Education Network, 2011 and 2012 conferences for the International Society for Improvised Music, and the 2012 Missouri Music Educators Association conference. Dr. White was named one of the original group of NSU Centurions, which signifies the 100 most influential persons in the university’s history. He also gained valuable experiences as the 2018-19 director of music as Kapaun Mt. Carmel High School in Wichita, KS.

Dr. White has been an invited performer at conferences for the North American Saxophone Alliance, International Society for Improvised Music, Oklahoma and Missouri Music Educators Association, and Jazz Education Network. Dr. White has performed with numerous nationally acclaimed jazz and pop artists. High school and college jazz ensembles throughout the country have performed his arrangements and original compositions. White is also active as a clinician with high school and college bands, and as an adjudicator at jazz festivals, throughout the United States.

A proud Kansas native, Dr. White received the Bachelor of Arts in Music from Emporia (KS) State University, the Master of Music in Jazz Pedagogy from West Virginia University, and the Doctor of Musical Arts in Saxophone Performance from the University of North Carolina at Greensboro. He will reside in San Luis Obispo, CA with his beautiful family: wife Megan, son Sam, and dogs Lily and Oakley.